Oh you guys. Just try n deny ya loves me. But no, I didn't spend the night with dust or primal. I gotta admit it, it was ez's good looks and his prime catfishin boat that turned me on.

We spent the night in Ez's fancy schmancy mobile home.

He took it to heart and says we gotta do this right. Needless to say, I didn't see much of the outside fer a week. Ez says I'm the most excitin be-A-utiful girl evah. He says to leave my eyebrow jes the way it is. The next weekend, we was drivin past the church agin and there was a new sign.

Oh man was Ez evah upset. He says we should part fer awhile n think about what God wanted. So I wents home ter visit with dad's wives.

After a week, lil Ezrider was berned. I know he's yurs Ez cuz he was berned right after you and I was countin da fleas we picked off'n each other n that sweet ez lovin. So romantic. Say hi to yur papa lil ez.

Well I guess that's all fer now. We'll be up fer some more o that excellent possum real soon now ya hear. U is some man ez! But befer I comes up, I'm goin Primals way ter visit. He says he has some real xcitin things ter show me round his neck o the woods. I'll be sure ter send y'all some pictures.

Dust....wots ur adress....Ima come there, kiss you right in front of ur wife...and let her shoot me. told primal my plan...he's down wid it too. I'll pick him up on my way to ur place. better a quick death than wot maggs has planned. I found a modelling pic she had from her early days. n here, I thought i jest drank too much...oy

I guess this was taken back when plucking (yes, eyebrows) was in fashion.
Top

Hey Dust. Congratulations. I hear you finally started your own business. Hope it's not another one of your get rich quick schemes.
Here's Dusts new business addy

/me lives in da middle of a swamp with live Crocs and poisonous snakes and killer snails. Ogre's are the only ones that can get in and have instructed the crocs to eat anyone else that attempts to enter.

/me has also hired a Dragon

still sounds like a better way to go...wats the addy on that swamp?

I don't recognize who this is from the back, anyone know?

They have a bike!

I am really trying to stay out of this HOWEVER here's a pic of EZ after the party at the swamp....

Collards is green, my dawg's name is Blue
and I'm so lucky to have a sweet thang like you.

Yore hair is like cornsilk a-flappin in the breeze.
Softer than Blue's and without all them fleas.

You move like the bass, which excite me in May.
You ain't got no scales, but I luv you anyway.

Yo're as satisfy'n as okry jist a-fry'n in the pan.
Yo're as fragrant as "snuff" right out of the can.

You have some'a yore teeth, for which I am proud;
I hold my head high when we're in a crowd.

On special occasions, when you shave under yore arms,
Well, I'm in hawg heaven, and awed by yore charms.

Still them fellers at work, they all want to know,
What I did to deserve such a purdy, young doe.

Like a good roll of duct tape yo're there fer yore man,
To patch up life's troubles and fix what you can.

Yo're as cute as a junebug a-buzzin' overhead.
You ain't mean like those far ants I found in my bed.

Cut from the best cloth like a plaid flannel shirt,
You spark up my life more than a fresh load of dirt.

When you hold me real tight like a padded gunrack.
My life is complete; Ain't nuttin' I lack.

Yore complexion, it's perfection, like the best vinyl sidin',
Despite all the years, yore age, it keeps hidin'.

Me'n' you's like a Moon Pie with a RC cold drank,
We go together like a skunk goes with stank.

Some men, they buy chocolate for Valentine's Day;
They git it at Wal-Mart, it's romantic that way.

Some men git roses on that special day
From the cooler at Kroger. "That's impressive ," I say

Some men buy fine diamonds from a flea market booth.
Diamonds are forever," they explain, suave and couth.

But for this man, honey, these won't do.
Cause yor'e too special, you sweet thang you.

I got you a gift, without taste nor odor,
More useful than diamonds....IT'S A NEW TROLL'N MOTOR!!

Look's like Tater is tryin to steal Magg from the Ogre.....By the way Magg...That pic that Sandbar submitted....is TATER...

Ez dun drink budlight, so that aint any party I been to. would be at least a dozen coors light on me were it moi. sides, I'm blonde, and I sure dun gotta crew cut tyvm.

Just had 4 days off work and since Ez kept on insisting I come visit him in Canada, I said oh why not.

Flew bout 15 hours to Canada. Ez was supposed to come pick me up at the airport, but after half an hour decided to take a cab.
Was glad cause I kinda had the chance to really see Canada at its best.

The cab drove me right to Ez's porch, and I must say I was really happy to see him.... well...

So, we went inside and he showed me round his house a bit. The first thing I learned is that Canadians dont have refrigerators. I was like

But then he opened his kitchen doors and everything was clear.

I didnt even have the chance to unpack when Dust, Primal and Maggs rang the doorbell. Frankly I was real glad cause Ez was starting to get real weird on me there. I cant explain the look on his face, me thinks it was the stew he was drinking, they call it Beer in Canada i think.

Even tho I was all tired from the trip and everything, we decided to go out and have a few drinks.
After bout 2 hours the situation started to go wild.
But you can really learn alot of things about people when they're drunk ya know?
For example, Ogres do not take alcohol too well. With 7 beers in him Dust was going on and on about how Ez would look great on his plate, he even gave me a recipe

Even tho I thought Primal was aaaalways in a good mood, but man this time Ez got him wasted for good. Oh yes, he told me I should post an advertisement for all da free ladies outside Wyoming to be free to contact him, I say outside of Wyoming because:

P.S. dont tell him I said that, he made me promise not to mention Dolly to anyone, she really broke his little heart

It was almost 6 am and we were still at the bar, when we heard Ez saying something like:

We went home walking since all the signs said

Maggs understood the "dont drink and drive" sign, but kinda wanted to go round the law 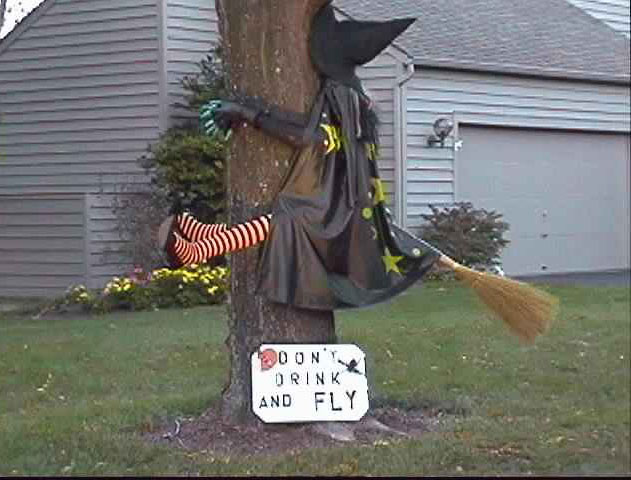 We finally hit the beds and didnt wake up till 4 pm next morning (morning?!)

At breakfast I told Ez I need to have a serious talk with him. I said I had loadsa fun last night but that I think he is totally off limits. I told him I think he's an alcoholic. He just said:

I stood up and said: Oh Ez denial is the first sign of alcoholism, for gods sake dont

I know I know, I should have said to get his head out of his.... behind... that really pieced him off. He stood up, ran outside and slammed the door (the kitchen door). Then he realized it was his Canadian refrigerator. Opened the door like nothing happened and walked away through the front door.
2 days he hasnt come back. Dust was desperate cause his dinner has run out, Primal was on the phone (0800-date-canada) and Maggs was still trying to get that broom off her ...behind...

I talked Dust into helping me go find Ez. He was really a sport. Stopped at every tree to put up the sign we made:

The third morning we found him on the sofa:

It was really a relief. We kicked him goodbye since we had to get going and whispered in his ear:

Cancel my subscription to the Resurrection
Top

Y'all have been way to mean to ez. Look at all he's done fer ya. When dust's car needed fixin who did ya call? huh huh huh? Why the master mechanic of course. Our very own ezrider. If it weren't fer him, you's still be thumbing it. Look how beautiful after ez fixed it fer ya.

He didn't even charge ya xter fer addin door locks outer the goodness of his hert.

And wot about you primal? When ya complained of it bein too hot, ez offerd to put AC in yer car fer ya. It sure was cool after that now wasn't it?

Here he is hard at work on XamaltheasX truck.

Ya all is jest ungrateful whelps I tell ya.